We usually say things such as “idiotic Malaysian drivers” but how often do we actually sit down and contemplate the situation?  My own initial reaction to the picture below was “what a b&$(#^@ selfish driver!” and although he (or she, to be politically correct) is actually a selfish driver, I also think that it is a product of poor governance. 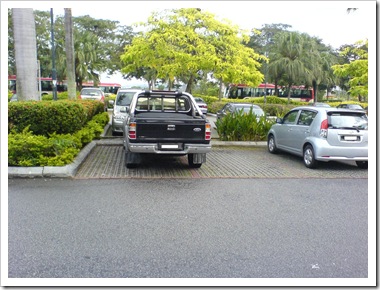 Poor governance in two ways; (1) all our developers still use a standard parking allocation space that was drafted out when cars were the size of a Harley Davidson and (2) we never have much of an enforcement due to our culture of “give and take” (or more plainly, tidak apa (never mind in Malaysian).

Owners of properties also like to boast about 100s of car parks that maybe can fit 50 Honda Accords (that’s really larger than any Honda that were produced before 90s).  As a shopping mall, would it not make more sense for them to be able to accommodate 75 cars instead of boasting 100s of car parks that actually fits 50 (ok, ok, I am exaggerating, but you get my point).

I initially thought that the KLIA main terminal had car park spaces for 4 wheel drives (as they advertise when you go into the car park), but upon asking the car park attendant, it is the same size but in a more “secured” area as there were many stolen 4WD before.  What I don’t understand is, how come they pay the same amount as the rest who are not in a more “secured” area.  Well, that’s another story.

What do you think? (since this will be more impactful for those who just came back from the Matta Fair!)

Posted by Ian Tan at 11:12 AM
Labels: automobile, opinions