Ok, back to what I am more interested in ... food, cars and life. Over the weekend, I was in Jusco Equine Park and there were 2 peugeots on display, namely the locally assembled 206 (Bestari) and the 407. I am not sure how many of you are aware that the locally assembled 407 comes in two guise, a normal specification and a premium version. The "premium" version has leather seats and a GPS system integrated into the middle console. Although the car itself may be quite handsome, there are 2 very troubling problem with the locally assembled 407. 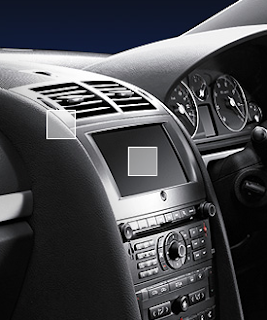 1) One of the key attraction of a peugeot (or most french cars) is the front driver and passenger seats. They are body hugging yet extremely comfortable that indirectly gives you unprecedently confidence when driving the car. Stepping into the locally assembled 407, this un-explainable feeling of disappointment is immediately there. The seats, although comfortable, just lost the peugeot thing ...

2) The premium version sports an additonal "bump" on top of the middle console. This is for the radio display and so on as the space where it is located on the normal specification version is now taken over by the integrated GPS. The problem with this bump is that it looks worse than some after-market add-ons! How can a company that is trying to portray some form of luxury make such a decision? My old Wira's rear sunshade had more class or luxury feel to it than this "bump"

That is just "sitting" in the car. The car may be great to drive but I don't think I will be spending more than RM120,000 whereas a more "luxurious" car (in comparison) can be had for less.

However, when I went over to have a look at the 206, it did not give me this feeling of being shortchanged. Although I never liked the shape of the 206, it does make me want to give is a try.
Posted by Ian Tan at 10:21 AM 1 comment:
Labels: automobile

Ok, this is something that have been puzzling me concerning the sodomy case of DSAI and Saiful. If you are sodomized, or raped, you would make a police report instead of going to the doctors to find out if you were sodomized, or raped. Wouldn't that be the normal sequence of events. Only after you have made the report, you may be told that you need to go to the doctors for the embarrassing inspection.
Posted by Ian Tan at 7:12 PM No comments:
Labels: opinions
Newer Posts Older Posts Home
Subscribe to: Posts (Atom)