There has always been this talk that there’s a lack of third party lenses for the Sony Alpha range of DSLRs.  I guess that is partly true as the number of options available for Nikon and Canon users far outstrip what’s available for Sony DLSRs (including Minolta lenses). 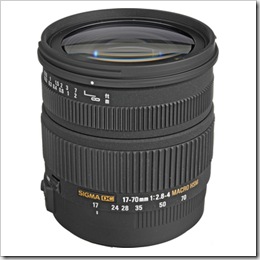 However, it must be noted that you do get the whole range that you require for Sony Alpha DSLRs anyway and for most hobbyist and even professionals, the range available is more than sufficient for their needs.

One other complain is that third party lenses are sometimes reluctant to produce Alpha mount versions as the demand is less.  May be true but from un-official numbers, it would be hard to ignore the number of Sony Alphas being sold lately.

Sigma announced in December 2009 that they are launching the Sigma 17-70mm F2.8-4 DC Macro OS HSM for Nikon, Canon, Sigma, Sony and Pentax mounts.  Well, after releasing the Nikon, Canon and of course Sigma versions, they have released the Sony and Pentax versions 2 months later.

What’s interesting?  This is in direct competition to the Tamron 17-50 f2.8 (quite reputable) lens.  It seems to be competitively priced, recommended retail pricing of around USD550.  Something to consider as an alternative to the Tammy?

Ahem.. Tammy is good.. no idea about this Sigma lens