More Sony Mirror-Less Camera Rumours … or is it?

There have been many rumours about Sony introducing a new mirror-less interchangeable lens digital camera with many leaning towards the use of micro four thirds (4/3) sensors, a new R-Mount and even a Ricoh type approach of having interchangeable sensor/lens combination! 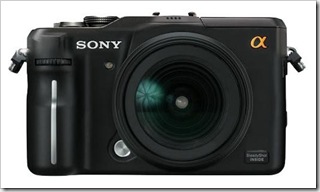 Many creative pictures were created and even some people discussing about Sony using the Leica mounts!  Many different body types and names were mentioned, including Sony Alpha 10 (above) with an ergonomically challenged design (to me anyway) to a more standard looking camera such as the Panasonic GH-1 (below). 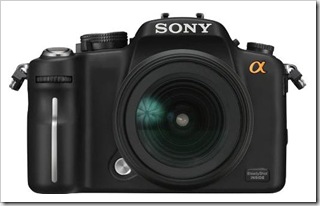 As there were too many rumours out there, it is difficult to take a calculated guess but most agree that Sony is very likely to launch a mirror-less interchangeable lens camera (as per Olympus PEN and Panasonic GF-1).  Of all the rumours, I believe that the specifications below would be most likely (at the time of posting – as more news comes out, this may change).

It is likely to be priced slightly higher or around the Panasonic GF-1 pricing but with a larger sensor and the likeliness of using the same engine as the A550, it may be an interesting option.

Hmm how about posting your creative prediction version picture of the mirror-less camera?

can't ... not enough creative juices to cut, paste and modify a new camera!