In the flash settings, there are several options other than the standard “logo” and the wireless flash settings.  There’s the rear flash and the slow flash.  These are normally also found in other DLSRs, so what are they?

In pictures where the subject is still, there won’t be any  difference.  The difference here lies in the timing of t 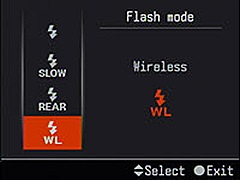 The rear flash mode triggers the flash just before the closing of the shutter.  Basically, now the latter movement gets the flash and hence the subject will be seen as moving forward.

(Sorry, was not able to take the pictures to illustrate it).

In low light situations, using the flash will typically produce a picture that looks like it had a black background as the ambient light is missing due to the faster shutter speed (in automatic mode).

The slow sync flash function is to allow as much ambient light as possible (maybe one or two step faster shutter than in automatic mode without flash) and hence be able to capture some of the background ambient light.

My explanation for the above may not be easy to comprehend, leave a comment if you have any questions.

End of this short series …