Anyone with a camera would probably know how to use the self timer feature.  This is generally used to delay the shutter (picture taking) sufficiently so that the person can position him/herself into the frame.  In other words, sufficient time to “run” back to get their own picture taken.

The self timer is also used to ensure minimal shake to maximize sharpness of the picture, it is a popular alternative if one does not have a remote shutter release. 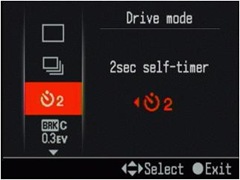 Generally, self timers are 10 second delays. On the Sony A200, it allows for a 2 seconds delay (not sure about other cameras but I am sure they too have something similar).  I am not sure why there is such a feature as surely 2 seconds is not really sufficient for you to “run” back to position.  However, I believe it can be used for Macro shots, where a 10 second delay may be too long for a picture subject to stay still.  For example a moving caterpillar may no longer be in focus after 10 seconds!

To be continued … Part VIII (and final part)

get a phottix shutter remote! never have to run to get into your shots using the timer again. :)

actually have a remote shutter release, cheaper than phottix =)