For those who are unaware, Sony sponsors a 2 day event called the Alphanatics Convention.  It was earlier slated for the 23 – 24th October 2009 at the Hilton.  Most of us owners of Sony Alphas have been looking forward to this but unfortunately, it has been postponed indefinitely. 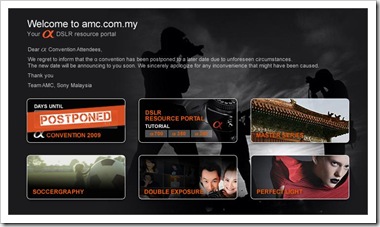 The online announcement from the ex-Product Manager of Sony Cybershot and Alpha, Mr George Wong.

I sincerely regret to inform you that the Alpha Convention (Or what we intended to call as the Alphanatics Convention 2009 this year) that was slated for the 23rd & 24th of October of this year has been officially postponed to a later date, hopefully towards the first half of next year.

ex-Product Manager as he has decided to start his own business in teaching photography.  I haven’t heard about where he will be located but I am sure we will find out soon.