Tamron, known as one of the most successful 3rd party lens manufacturer … and also for its infamous long … long naming convention for its lenses have just launched another acronym for their lenses!  It’s USD!  For those who wants a short de-acronym of this Tamron lens: 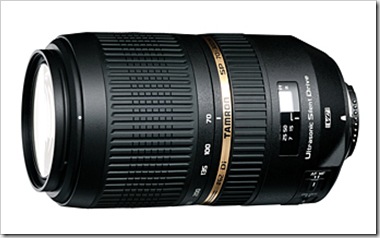 While this new lens is designed for digital SLR cameras, it can be used with both full-frame sensor and AF 35mm cameras with a zoom range of 70-300mm; or with APS-C sensor cameras where the angle of view will change the zoom range equal to 109-465mm.

One thing to note is that the Sony mount (or Alpha mount) version will not include the VC as there isn’t a need.  This I assume will mean that it will be priced a tad cheaper?

Of course, the other interesting thing to note is that instead of saying Nikon and Canon versions will be announced followed later by Pentax and Sony, they now launch their new lens with Nikon followed by Canon and Sony mentioned in the same breath!  Hmmphhhh …