Recently, I had a second opportunity to witness a fungus infected lens.  The first time I saw it was a guy who was trying to sell off his lens to a friend of mine and luckily for us, we inspected it properly.

This second opportunity was a telephoto lens that was part of an SLR kit (note SLR, so it has been around for sometime).  The lens was seldom used and in fact was left in a camera bag in an air-conditioned room for some time.  According to the owner, probably more than 2 years.

When we first looked at the camera, it showed some signs of fungus growth … 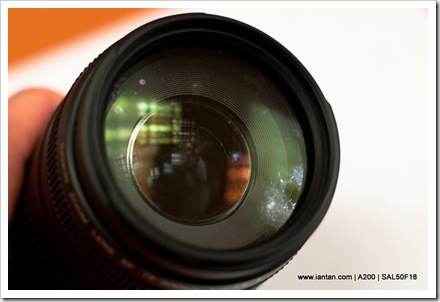 And upon closer inspection through looking at the sides of the glass, it was definitely infected with fungus. 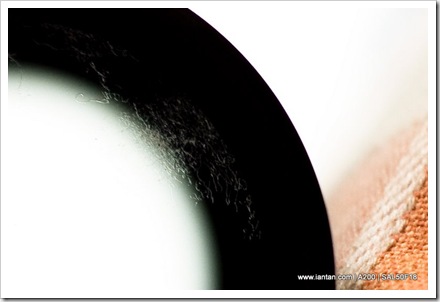 It is quite difficult to show in pictures the effect of the fungus, but the following image probably will tell you the whole situation.  It was taken with the telephoto lens zoomed to it’s maximum and looking through the lens directly. 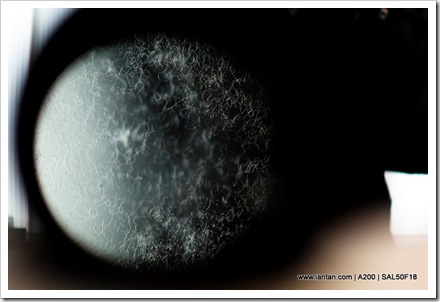 The above image sometimes still gives me some goose-bumps and in fact, the lens was so badly infected that you can actually see fungus on each glass element!  Luckily for the owner, it’s not one of those expensive lens.

To clean such a lens would cost quite a bit, in this case, almost 1/3 the price of the lens probably but the issue is that after it is cleaned, the optics probably wouldn’t be the same.  If you ever suspect your lens becoming effected with fungus, do get it cleaned immediately as when the fungus sets in, it will be beyond repair.

yikes! Scary to have such lens. It pays to have to have a good dry cabinet to keep all your camera accessories fungus free. :-)

so that's how fungus looks like.. tx for sharing what to look out for