Is the A77 the replacement name for the A700 successor?

Sony gave further in-sight into the long … way too long (for me anyway) awaited A700 successor by calling it “Advance Model DSLR” at Photokina 2010.  Well, with the introduction of the A33 and the A55 SLT (Translucent Mirror), many are expecting it to be called the A77SLT as the camera is also expected to have a translucent mirror. 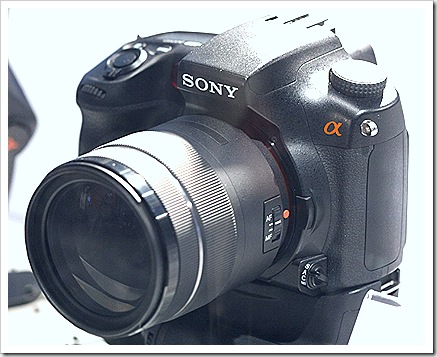 What was revealed at Photokina 2010 was that it will have a vertical grip incorporated (yikes!, that will have it rather large and possibly heavy), does AVCHD and will be using Sony’s APS HD CMOS Sensor.

One thing for sure, it is aimed at serious enthusiast and other than those specifications mentioned above, I am sure it will be better than the 10 fps that the A55SLT is capable of.  However, I personally have to think twice about using a higher end DSLR that is not based on a PentaPrism.  Yet to personally try out the non-optical viewfinder as the SLTs are shipped with an electronic viewfinder.  This I believe is to also help brightened up the 30% light that is use for the viewfinder.